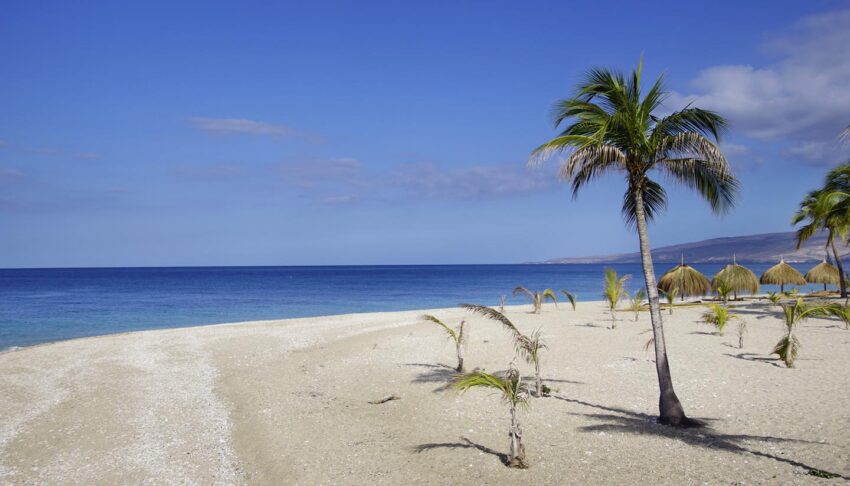 We’ll give you a run-down of the top 10 best summer destinations in Haiti, both mainstream and local, to give you a view of the most colorfully vibrant beaches, iconic islands, and architectural wonders that make Haiti a heavy contender in the Caribbean vacation realm.

Now, when we talk about a summer vacation in Haiti, we mean live music on the beach listening, exciting excursion taking, and living up the nightlife dancing summer vacation, just to get started.

So, let’s take the North to South approach and go along the exotic Haitian coastal cities, to see which one of these inspiring destinations will be making your summer holiday list.

Once home to the first capital of Haiti in the town of Milot, Cap-Haitien or “Le Cap” is the second-largest and most populated city in modern Haiti, now only a 3-hour road trip from Port-au-Prince thanks to a new highway system.

Founded in the 1700s, Le Cap still bares its French colonial essence with structures such as the famous Gingerbread-Style Houses (a favorite of Napoleon’s sister Pauline Bonaparte), the towering ruins of the Citadelle Laferriere fortress, and the once extravagant Palace of Sans-Souci which UNESCO designated as a World Heritage site like non-other in America.

Travel through the city on an emblematic Tap-Tap (quick, quick) bus, which will pick you up and drop you off at various points in the city, or embark on a journey via Water Taxi to the most spectacular beaches in Cap-Haitien:

This peninsula stretch of beauty is exclusive to passenger cruise lines, where visitors can enjoy zip-lining over a picturesque beach, engage in watersports, or simply let the good vibes take you away.

Just a 7-minute ride or 30-minute stroll from Labadee, Cormier’s shadier and cooler sands have a more native or rural feel to its charm, sitting in front of the top-rated Cormier Plage Beach Resort.

You can trek to Belly Beach on horseback through the soothing vegetation, to discover a coconut palm oasis-like dream ready for your bare feet to dip in its sparkling waters.

As we move further from Cap-Haitien to the North East in the commune of Port Margot, you’ll find the sight-quenching ChouChou Bay Beach looking from atop the surrounding tropical mountains that embrace this crescent-shaped seascape.

Upon arriving you’ll immediately notice a certain tranquility to Chouchou Beach due to its distance from the local population, making it a perfect spot to swim, chill, and simply watch the silky indigo blue waters sway back and forth like a hypnotic dance.

Now heading down to the South East Central coast of Haiti in the commune of Petit Goave, Bananier (meaning banana) Beach is immediately reminiscent of French Polynesia and the likes of Fiji, with an array of blues, greens, and turquoises that radiate just above the thriving coral life.

Bananier Beach can only be reached by boat, and the best way is by excursion, where you can set up various activities like:

For special occasions, you can organize a private Moonlight Glow Party, where you and your entourage will enjoy an exclusive Haitian getaway experience with fluorescent lights, live DJs, and tropical cocktails.

Tortuga has become the most legendary coastal island in all of the Caribbean, not only thanks to films such as Pirates of the Caribbean but the Island’s true history of piracy in the 17th century where Tortuga was used as a center for Buccaneers and Pirates (known as the Brethren of The Coast).

Its most iconic resident was none other than Captain Henry Morgan who launched several military offenses from the island, apart from reportedly enjoying the beautiful beaches and abundant wildlife like oxen, horses, and red crabs.

Across from Port-de-Paix Northwest of Haiti, awaits Pointe Ouest Beach on Tortuga’s southern shores, where the sand is as white as the clouds, and the Larimar colored shallow waters stand out brilliantly against the deep blue Atlantic surrounding it, where you can go Deep Sea fishing or Hike in its Mountains at 459 meters above sea level for a crazy panoramic view.

Yet another killer beach on the coast of Petit Goave, lined almost perfectly with Palm trees providing plenty of shade to set up your picnic blankets, as you’re allowed to take your own food, or contribute to the local community and have your food prepared for an authentic Haitian experience.

Campsites are available for adventurous travelers, who’ll have the opportunity to feast their eyes on a spectacular pink and orange sunrise reflecting off of the piercing blue ocean surface.

The commune of Jacmel is Haiti’s most culturally artistic and historically significant destination for its 19th-century colonial-style architecture, the magnetic Carnivals or Kanaval honoring Afro-Taino ancestry and natural wonders such as:

Northwest of Jacmel, the Basin Bleu is a set of natural pools formed by the surrounding waterfalls and gives off a lovely cobalt blue color from its depths.

An expansive 12km strip of exotic beach where tourists and locals alike go for some of the best-fried fish and plantain chips, a great family stop.

Some of the reasons why Jacmel is also a UNESCO World Heritage Site.

Traveling deeper into the southwestern region of the Tiburon Peninsula, you’ll find what has been called the most beautiful commune in all of Haiti, Port Salut.

Frequently visited by locals, the water in Dauphinee Beach is so clear you’ll look as though you’re hovering in the air as you snorkel by, being able to appreciate the diversity of marine life in all of its natural splendor and navigate through a system of caves along the beaches rocky areas.

The small forest village of Furcy offers a great opportunity to kind of let go of the beach for a minute, and venture into the wilderness for a refreshing experience.

Just 45 minutes from the capital of Port-au-Prince, you can feel the cool breeze beginning to pick up, and the scent of fresh pine fills your lungs as you prepare for a forest hike up the mountain.

If you get a little tired on your way to the top (horses are also available by the way), you can rent out a treehouse made of resistant recyclable materials or choose a small cabin to spend the night and see the stary night as you’ve never before from the tree-top balcony.

Our second Island on the list off the coast of Les Cayes is Ile-a-Vache or Isle of Cows, named after (you guessed it) a high concentration of cows on the island, but these days, Ile-a-Vache is prime vacation territory in Haiti with attractions like:

Only accessible through Abaka Bay Beach Resort, you can spend the day in absolute relaxation with the feeling of having the whole island to yourself.

This accompanying island is relatively small in size, called “Lovers’ Island”, it makes a great romantic spot to walk out to and have a little private time.

By the way, Ol’ Captain Morgan also spent a great deal of time on Ile-a-Vache, planning his takeover of the Caribbean. Garr.

Les Cayes or The keys is one of Haiti’s main tourist destinations on the Southeast coast between Port Salut and Jacmel, that keeps visitors coming back to its widely popular sites:

Not only is Gelee Beach among the top beaches in La Hispaniola as a whole, but it’s also renowned for its Southern Haitian Cuisine, with fresh Lobster, Conch, Fish, and Red Crab dishes that are typically found all throughout the Tiburon Peninsula.

The Botanical Garden of Les Cayes

Further inland at the city’s northern entrance, this Garden is great to learn about the flora diversity that is abundant and endemic to Haiti in particular.